Welcome back! This dev blog reveals the Monk specialization. This spec is a bit more complex than some of the others, but players who take the time to understand how it works will likely find it to be very powerful.

Monks rely on dodging attacks (and even spells!) in order to dish out devastating counter-attacks to their enemies. While many players might mistake the Monk’s reliance on dodging as a sign that it is a defensive class, I think you’ll find that they have plenty of offensive opportunities as well. 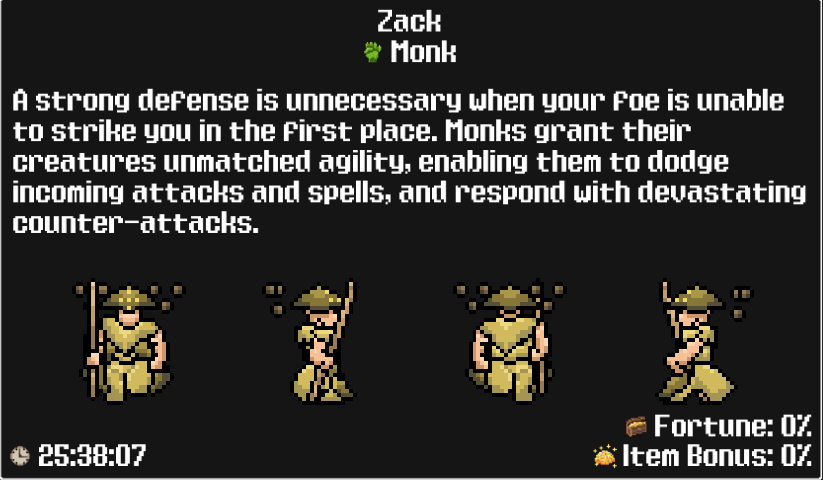 Please note that the numerical values shown for each of these perks are not yet final. Any values shown in {brackets} increase as you level up the perk, but for the sake of clarity, I’ve provided you with their maximum values already.

Kaze – After your creatures Dodge, they counter-attack the enemy.

Chikara – Increases your creatures’ damage dealt with Kaze by {100%}.

Kame – After your creatures Dodge, they gain {10%} Defense for each time they’ve Attacked with Kaze.

Kyushu – After your creatures counter-attack with Kaze, they have a {20%} chance to move to the top of the Timeline.

Piasu – When your creatures counter-attack with Kaze, the attack has a {50%} chance to deal double damage.

Sakkaku – After your creatures counter-attack with Kaze, they have a {25%} chance to Attack an additional time. This effect can occur repeatedly.

Conpe – Your creatures deal additional damage equal to the amount of Speed they have greater than their target.

Fukachiron – {100%} of your creatures’ chance to Dodge attacks is applied to spells as well.

Kenko – After your creatures take damage from a source that is not an attack or spell, they have a chance equal to {50%} of their Fukachiron chance to prevent that damage.

Torikku – Your creatures have an independent {50%} chance to dodge attacks.

Inori – When your creatures would receive fatal damage, they have a chance to prevent that damage equal to your Torikku’s chance to Dodge.

Jonetsu – Your creatures’ Agile buff has a {100%} greater chance to activate.

Koshu – After an enemy Dodges your creatures’ attacks, they have a {50%} chance to Attack again.

Kyokugei – Your creatures deal additional damage equal to {100%} of their Speed.

Machibuse – While your creatures are Defending, they receive a bonus to their Speed instead of Defense.

Thylacine Studios @ThylaStudios We hit our $70,000 goal to unlock Realmshaping! As a surprise, I'm happy to announce that Siralim Ultimate will fea… https://t.co/R24mILZqB7